The Phylogeny of Carangiform Fishes: Morphological and Genomic Investigations of a New Fish Clade 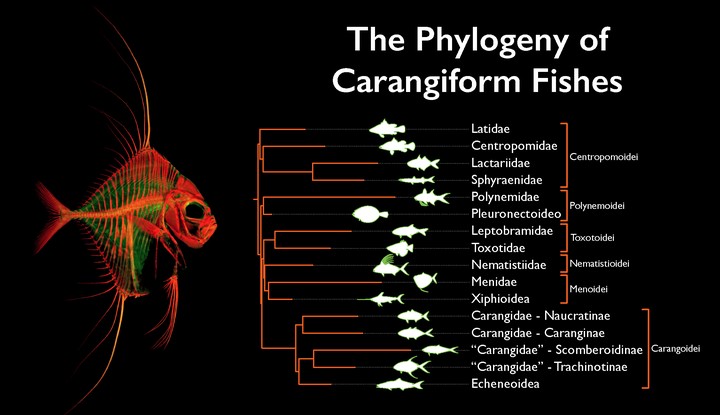 Surveys and analyses of anatomical characters have allowed researchers to describe a wealth of anatomical features and contribute to our evolutionary understanding of fishes for centuries. However, most of these studies have focused on specific lineages or families rather than the broader evolutionary relationships. As such, there has been a lack of progress inferring higher-level relationships among percomorphs. With the use of large-scale DNA-based methods in multiple studies over the past two decades, the backbone of the phylogeny of fishes is becoming increasingly understood. Taking this DNA-based phylogenetic backbone into account, we have the opportunity to integrate discrete morphological characters and DNA sequence data to test earlier topologies and provide new and improved hypotheses of relationships. The carangiform fishes, which include approximately 1,100 species in 29–34 families, were initially recovered as a clade in DNA-based studies. Subsequent to its initial recovery, many molecular phylogenies have been published assessing carangiform relationships, but these studies present a conflicting array of hypotheses on the intrarelationships of this clade. In addition to this diversity of hypotheses, no studies have explicitly diagnosed the clade or its major subgroups from a morphological perspective or conducted a simultaneous analysis to put forth synapomorphies for relationships across the Carangiformes using a combination of molecular and morphological data. In this study, we performed combined analyses of new and previously identified discrete morphological characters and new and previously published genome-scale data to characterize the evolutionary history and anatomical variation within this clade of fishes. Our novel morphological dataset included 201 hard and soft tissue characters, and it was combined with a novel dataset of 463 ultraconserved element loci. Our combined analysis of these data resulted in a monophyletic Carangiformes, with a series of subclades nested within. We put forth a series of subordinal names based on the recovered branching pattern, morphological character evidence, and relative stability in large-scale studies. These suborders are the Centropomoidei, which includes Centropomidae, Lactariidae, Latidae, and Sphyraenidae; Polynemoidei, which includes Polynemidae and the infraorder Pleuronectoideo; Toxotoidei, which includes Lepto- bramidae and Toxotidae; Nematistioidei, which includes Nematistiidae; and Menoidei, which includes Menidae and Xiphioidea. Furthermore, we highlight and discuss morphological characters that support the relationships between two or more lineages of carangiform fishes. Finally, we highlight patterns of morphological convergence among some carangiform fishes and their previously hypothesized sister lineages.